And Then The Spider Almost KILLED Me. True Story.

Disclaimer: I do swear like a Sailor in this one. Sorry. But I hate spiders. They freak me THE FUCK OUT! 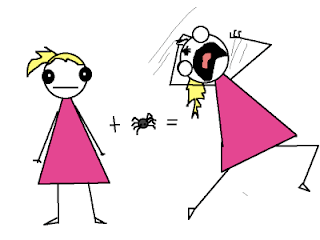 This Picture is from the AWESOME Allie Brosh
http://hyperboleandahalf.blogspot.com/2010/03/spiders-are-scary-its-okay-to-be-afraid.html

Today I had a follow up apt for my scratched eye. But I had some time to spare before I had to be there so I stopped at Starbucks to get a coffee and something to eat. I got this kinda awful tasting raspberry swirl pound cake. Don't try it. :-p And then I went over to Michaels so I could get a few things for my Portfolio project.

I came out of Michaels and sat down in the drivers seat. To my horror a large black spider with what appeared to be grayish dots on it was sitting on the dashboard. I HATE spiders. They freak me the fuck out. I grabbed a CD and tried to squash it, but it ran into the car and I lost it. At this point I needed to make my way to my apt. So I started driving *it was about a mile from where I had been* and was freaking out the entire time.

It would have been my WORST NIGHTMARE if it popped up somewhere near me. I was picturing the carniage on the road if that happened. Because believe me I would have either hit someone because I was freaking out or I would have been hit because I slammed on my breaks. I decided to lay it out for that damn spider:

Me: Spider, if you stay hidden I wont kill you.

Spider *plotting*: We'll see about that!

I got to Lenscrafters and was 15 min early and they were opening in about 4 min. So I sat there drinking my coffee and watching for the damn spider. Finally I couldn't wait anymore so I got out of the car and walked around to the passenger side where my purse was. I decided to hit the dashboard a few times to see if it scared it out.

It did. About 30 seconds after my last smack it came running out.

Spider: HAH! You're leaving! Now I'll hide somewhere and I crawl on your face and scare the shit out of you while you're driving. Possibly giving you a heart attack.

Me: NOT SO FAST you little fucker!

I grabbed my horrible pastry still in its bag and smashed it. Then screamed and dropped the bag and jumped quickly away from the car. I totally knew I looked ridicules! But I didn't care. Its an EPIC BATTLE between this spider and me. I grabbed my Maryland map and smacked it again on the floor of the passenger side.

It was dead. I was shaking and laughing because I was in shock or something. Shut the door and walked into LensCrafters for my apt. The two ladies at the desk were looking at me oddly.

2nd Lady: OH! We thought you were having car problems.

Me: *laughing harder and still shaking*: No! I wish! It was huge! *show them the size using my fingers.

We all laughed. It was actually quite funny because I know I looked like a spaz. But they understood. The 2nd lady even offered me windex to kill it. I told her it was already dead.

And that is the story of my epic spider battle. I'm sure I'll have bad dreams tonight about it. And I'm sure its siblings or spouse is plotting its revenge... 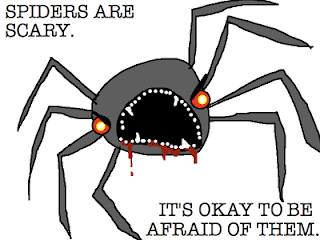 Posted by Lesley at 1:01 PM
Email ThisBlogThis!Share to TwitterShare to FacebookShare to Pinterest